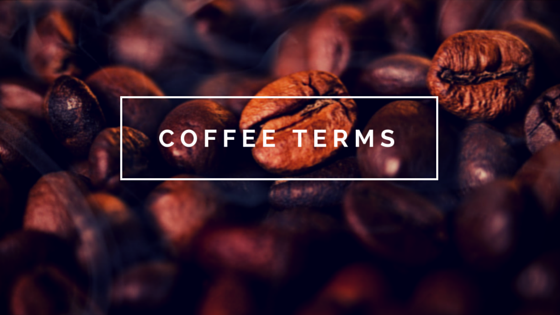 Acidity – A measure of the acid content of the liquid; in fine coffees acidity results in a pleasant sharpness. Not to be associated with the genuinely sour taste of inferior coffees.
Aftertaste – The sensation of brewed coffee vapors released after swallowing. Characteristics will range from carbony to chocolaty, spicy to turpeny.
Aged – Beans stored for a year or more prior to roasting, a wait that reduces acid while developing Sweetness and Body.
Aroma – The sensation of the gases released from brewed coffee; may be described as ranging from fruity to herby.
Baked – Possessing an underdeveloped flavor, the result of insufficient roasting at low temperatures.
Bitter – Perceived by the back of the tongue and characterized by solutions of quinine, caffeine, and other alkaloids; usually caused by over-roasting.
Bland – Perceived by the sides of the tongue and ranging in taste from “soft” to neutral. Found often in washed Arabica coffees such as Guatemalan Low Grown.
Body – Associated with mouthfeel and texture, this should be a strong, full, pleasant characteristic; see mouthfeel.
Bouquet – The total aromatic profile, resulting from compounds in the fragrance, aroma, and aftertaste.
Bright – A term sometimes used for coffee with good pleasant acidity.
Burnt – A bitter, acrid flavor sometimes found in overly dark-roasted.
Buttery – A coffee whose full flavor and oily Mouthfeel bring to mind the richness of butter.
Caramelly – A common aromatic sensation; reminiscent of candy or syrup.
Carbony – A common aromatic sensation in dark roasted coffees, reminiscent of a burnt substance.
Chocolaty – A common aromatic sensation in a brew’s aftertaste, reminiscent of unsweetened chocolate or vanilla.
Cinnamony – A light, sweet, spicy flavor reminiscent of cinnamon.
Clean – Coffee whose flavors are clear and untainted.
Cocoay – A thin taste of cocoa, usually associated with Stale coffee.
Dead – Like Flat, lacking in distinctive Aroma, Fragrance, or Aftertaste, sometimes particularly used to denote a coffee lacking in acidity.
Delicate – Related to mellow; characterized by a fragile, subtle flavor; perceived by the tip of the tongue. Found in washed New Guinea Arabica coffee.
Dirty – An unclean smell or taste that can be specific such as sourness or mustiness, or a more generalized taint that reminds one of eating dirt.
Earthy – Like Dirty, tasting of the earth.
Flat – Used when describing bouquet to denote a lack of strong perceptions in fragrance, aroma, and aftertaste; also called dead.
Flavor – The experience of aromatics once the coffee is in the mouth.
Floral – Having a subtle Fragrance pleasantly reminiscent of flowers, present in lighter roasts more often than in darker.
Fragrance – The aromatic sensations inhaled by sniffing; can be described as ranging from sweetly floral to sweetly spicy.
Fruity – An aromatic sensation reminiscent of citrus fruit of berries.
Grassy – Used to describe an odor and/or taste in some coffees that is reminiscent of a freshly mown lawn, with an accompanying astringency like that of green grass.
Green – Coffee that tastes sharp and herbaceous, usually resulting from too-early harvesting or under roasting.
Groundy – Tasting Musty or Earthy, usually due to improper storage.
Hard – A coffee that is neither Mild nor Sweet; sometimes used for coffees that smell of iodine.
Harsh – A hard, raspy, often caustic flavor sometimes described as “rioy”.
Hidy – Tasting of leather, usually due to the beans close contact with animal during storage or shipping.
Lifeless – Lacking in acidity due to underbrewing. See thin.
Light – An adjective used to modify descriptions of acidity, Aroma, or Body.
Mellow – A rounded, smooth taste, characteristically lacking in acidity.
Mild – Refers to a coffee that lacks any overriding characteristic, either pleasant of unpleasant.
Mouthfeel – The tactile sensations the coffee produces on your palate.
Muddy – A dull, indistinct, and thickish flavor that can be caused by the grounds being agitated.
Musty – A flavor that often occurs due to poor storage or lack of sufficient drying, aging or overheating. In aged coffees mustiness is not necessarily undesirable.
Neutral – Lacking in any Strong characteristics – a desirable trait in coffees used as the base for blends. A flavor characteristic that is desirable in good blenders. Used to denote a lack of any strong flavors.
Nutty – An aromatic sensation that is released as a brew is swallowed; reminiscent of roasted nuts.
Rich – Used when describing bouquet to denote intense perceptions of fragrance, aroma, and aftertaste.
Rioy – A somewhat grainy or starchy taste, like potato soup in texture.
Rough – Characterized by a parched sensation on the tongue, related to sharp, salty taste sensations.
Rubbery – Caused when fruit is allowed to partially dry while still on the tree, this is a fault that gives beans the character of burnt rubber. It is found mostly in dry-processed Robusta, not Arabica.
Soft – The absence of the parched sensation on the tongue; related to bland.
Sour – Related to over-acidity; a sharp, biting flavor, often from underripe beans.
Spicy – an aromatic and taste perception reminiscent of spices.
Sweet – Free of any harshness.
Taint – A chemical change in the bean brought about by any number of internal or external changes, which results in a change in the coffee’s flavor.
Thin – Related to under brewing, resulting in a coffee lacking in any acidity; also referred to as lifeless.
Turpeny – Tasting like turpentine smells.
Watery – Caused by the wrong water-to-coffee ratio, which results in the low level of oils in the coffee. This is a mouthfeel.
Wild – A gamey flavor often associated with Ethiopian coffees.
Winey – Reminiscent of a well-matured red wine; characterized by a full-bodied, smooth coffee. Often found in Kenya and Yemeni coffees.